They have been asking questions and getting curious about what is happening in the world, which then leads naturally to the scientific process of stating a problem, hypothesizing, experimenting, and observing — quantitatively and qualitatively — and then trying to draw conclusions, which leads to more questions. Specifically, students have been exploring the different between WHAT one observed and WHY it happened. When making scientific observations, students practiced using all of their senses before making an inference or trying to make sense of those observations. To dig deeper into this, students have engaged in demonstrations and experiments.

As students practiced the scientific method and the difference between making observations and inferences, they experimented with spinning eggs, dancing toothpicks, dancing raisins, and colored milk! Students watched the teacher spin two eggs on a table. The teacher then placed a finger on one egg and it stopped spinning. The other egg continued to spin after the teacher removed her finger. Students described what they saw and then guessed why one egg and stopped and the other kept spinning. The answer was revealed when the teacher dramatically dropped both eggs onto her patio. When the eggs broke, the students discovered that one egg was raw while the other was hard boiled. The raw egg keeps spinning because the egg yolk continues to spin inside the egg even after the teacher stops the egg with her finger. 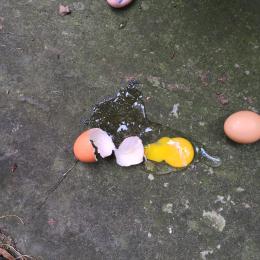 For the toothpick experiment, students watched a toothpick float on water and then rush to the edges of the container when the teacher added a drop of dish soap. They described what they saw and then learned about why this happens as they explored concepts of density, floatation, and surface tension.