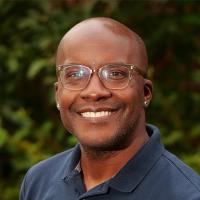 Director of Diversity, Equity, and Inclusion

A Conversation with Lab’s Director of Diversity, Equity, and Inclusion Anthony Perry, PhD

We sat down to talk with Dr. Perry, our Director of Diversity, Equity, and Inclusion, to learn more about who he is and what he hopes to bring to The Lab School community.

Charlene Carruthers, in her book Unapologetic: A Black, Queer, and Feminist Mandate for Radical Movements, argues that “everyone invested in collective liberation must answer the following questions critical to determining the health and success of our movements: Who am I?, Who are my people?, What do we want?, What are we building?, and Are we ready to win?

Before many people at The Lab School met Anthony Perry, PhD on individual and group Zooms, he sent out an email to our “staffulty”—as he calls our faculty and staff, a term that has been joyfully adopted by the community—setting out to answer the question “Who am I?”

Prior to Lab, Dr. Perry worked as a Spanish teacher for 15 years at five different schools across the country where he also worked on various DEI initiatives.

When you started at Lab, you sent a very powerful and personal email. Why do you think sharing personal information is important?

We are all connected, and we all need to do the work of equity and inclusion. If people are to truly engage with each other with the goal of collective liberation, we must share the answers of Charlene Carruthers’ five questions with each other. Seeing each other as individuals helps peel back some of the layers of discomfort.

Why the switch from long-time Spanish teacher to director of DEI?

As director of DEI, I can work to make sure that my classroom is not the only place where people can invariably show up as their authentic selves.

What are three of your most immediate or important goals in your new job?

My goals are not set in stone but here are my plans for big picture success: 1. Use my voice and my position to hold all of us at Lab to the commitment of DEI. 2. Encourage students, staffulty, alumni, and parents to think deeply about what an equitable and inclusive Lab School looks like. 3. Build trust and relationships. Rome was not built in a day, nor by one person. I can’t do this work on my own; I want us all to work together.

In what ways should students feel supported academically, socially, and emotionally?

Every student has to be valued and validated. Students need to come to campus knowing that the school has taken into consideration all parts of who they are and has worked to recognize and value all those parts. If people feel as if they can’t be their true selves somewhere, why would they put their whole selves into that work? I never want others to feel as if they have to hide a part of themselves. This goes for students, staffulty—everyone in the community.

Doing this takes time and commitment. As of late, there is a huge sense of urgency to do something, to make change, to “fix” everything that continues to be inequitable and non-inclusive. That sense of urgency doesn’t often make space for long-term engagement. It’s not that we don’t act; we do! But we also need to give ourselves the time to thoroughly engage in culturally responsive teaching.

And what does commitment to DEI really mean? Sometimes we don’t see the whole picture, but must recognize the process. For example, when one of my Spanish classes concluded at the end of a year, the students might not be fluent but they had acquired the tools and the determination to take the next steps. DEI work is a process, too; no one becomes fluent overnight.

As I said in one of my emails to our community, this is going to be exhausting work, there will be unimaginable frustration, there may be tears. We can only do that kind of work with time and commitment.

What should a school do to ensure Black and Latinx students can show up and learn as their full, genuine selves?

You have to hire more staffulty who look like and share a variety of experiences and identities with Black and Latinx students. Students and their families need to see their gender, gender expression, socio-economic status, religion, and race in their school—not just in the classrooms or hallways, but also in the offices of top leadership.

How can faculty and staff help each other have more honest and intentional conversations about power and privilege?

Practice. Let’s use the handy sports analogy. When you are training for a race, some days your runs feel painful and slow, other days effortless, freeing. It’s the same with difficult conversations. No one shows up in a vacuum for a perfect conversation. It’s crucial to recognize that every time a conversation about equity and inclusion occurs, whether planned or not, those involved are bringing different experiences to it. Having ground rules helps. There has to be space for people to speak with honesty and rawness without fear of retaliation.

Depending on their age, how can students be encouraged to help each other have more honest and intentional conversations about power and privilege?

We are having conversations about equity and inclusion with students in many settings—classes, clubs, affinity groups. We are also providing families with tools to have these conversations at home. It’s empowering for a student to go home and at the dinner table say, “We talked about this at school, what do you think?” And already, I have had many families reach out to me for resources about how to breach difficult topics with their children, how to better instill their family’s important values.

During the last several months, the BLM protests seem to have taken awareness about racial discrimination and its long history to a new level. Why now? What has changed? Do you think 2020 will have finally been a turning point?

I would love to be hopeful, yes. I think that overall, things are moving in a direction of a more equitable and inclusive world. But there has to be systemic change. I thought after the shootings at Sandy Hook and later Stoneman Douglas High School that those events would be the catalyst for
6the link   |   winter/spring  2021If there is one universal human desire, it may be the longing to be heard, seen, and understood for all of who you are—no matter the day, the mood, the moment.As part of The Lab School’s Diversity, Equity, and Inclusion initiative, all four divisions have been deepening their efforts around Affinity Groups. Based on surveys and input from students, the groups run the gamut from Gender Blender in Elementary and Latinx in Intermediate to the White Anti-Racist Group in Junior High and Family Structure/Adoption in High School. The groups cover races, religions, learning and physical differences, genders, family structures, sexuality, and more. No matter the age of the students, each group—facilitated by two or three faculty or staff members—starts with a check-in or an ice-breaker. “The goal is to have the groups be student-led,” says Junior High Dean of Students Rashaad Phillips. “The facilitators have activities or topics in their back pockets, but most times, we kick off a meeting with ‘What’s on your mind today?’ In the Junior High Students of Color Group, which I co-facilitate, there is usually a mix of what students bring up and what the facilitators have prepared for that meeting. Recently, we have been talking about the nuances of racial identity where change around gun control. But sadly, that did not happen. History shows that events like the Civil War or violence against women while simply marching for equality had to happen in order for enslaved people to be freed and women to get the vote. Civil wars and social movements don’t come out of nowhere, and I know we are benefiting from the work of people before us, but I am not sure I will see total equity and inclusion in my lifetime. That said, I do want to be hopeful. I am hopeful, or I wouldn’t do this work.

They are each working with their division since each division has its own identity and the students in each are at different stages of intellectual and psychosocial development. We will share tools and resources, set goals, serve as a support system for each other, and help make intentional and systemic change throughout the school.

Did you have a learning curve, culturally, when you married your Lebanese husband? Has your inter-cultural relationship personally broadened how you see issues around DEI?

Joe was born in Lebanon and moved to South Africa in High School then headed to Georgetown University. I have lived in Spain and Argentina, so I think we have enjoyed sharing our experiences in different countries and cultures, and having different nationalities. Our existence is inter-cultural . . . from food to music to languages spoken. Joe is an amazing cook and can recreate anything he tries at a restaurant . . . it’s almost scientific. I am definitely not wont for food whether it be Lebanese, soul food, or a mix of both!

Do you have a role model who has helped shape your career?

Dr. Kim Bullock, the director of DEI at St. George’s School where I worked for three years. She has and continues to support me; she lifts me up through her belief in me. I think most of us have felt that imposter syndrome at one time or another, especially being Black or Brown. Her encouragement around my potential and growth has been incredibly helpful. I see what she has done for me and I try to do that for others.

Tell me an anecdote about what you hope to bring to your new DEI position at Lab?

At St. George’s on National Coming Out Day, I gave a speech, telling a very personal story about my own experiences about knowing I was gay and coming out to my mother and grandmother. I didn’t always feel fully seen at St. George’s, so sharing this story with the whole school in chapel felt like standing on a precarious ledge. But I was able to because I had a group of wonderful colleagues who sustained me. Being vulnerable, I believe, gives others permission to do so, too, and through that vulnerability, we all get closer to feeling fully valued and heard.

Why is music such a powerful balm for you—if that is even the right word?

Since I can remember, I have never gone a day without listening to music. Part of that love and need for music ties back to my parents, my whole family. Music was part of our daily experiences, and there was always music on road trips, for family gatherings, for happy and sad occasions, and definitely on Saturdays, which were cleaning days. The music got us through. And my grandmother’s house was invariably filled with gospel music. For me, music is a way to exist, and a way to deal with emotions. And I love how music impacts memory. When something important happens, why not have a song to go with it ... a soundtrack to bring a memory back in vivid color?